“They would coddle [the food] like a baby or handle it and look over it as they would some gold. They played with it like kids making mud pies” – from the Minnesota Starvation Study, 1944-1945.

The ironic truth of dieting is that the intensity of food restriction is directly proportionate to the intensity of the food obsession; the more a person measures food, restricts it, and vilifies it, the more preoccupied with food she will be.

Just look at the Minnesota Starvation Study. In this year-long clinical study, which was designed to examine the effects of hunger, researchers recruited around 36 healthy men and severely restricted their food allotment for six months. The subjects’ caloric intake was roughly halved – from 3,200 calories per day to 1,560 (only 240 calories less than some current weight-loss diets prescribe!). The diaries that the subjects and researchers kept reveal the extreme physiological and psychological effects of the semi-starvation. In addition to the side effects that would be expected from long-term nutritional deprivation (most subjects experienced periods of severe depression, irritability, and apathy), the men developed disordered eating habits and troubling infatuations with food.

Consider this subject’s journal entry: “Stayed up until 5 AM last night studying cookbooks. So absorbing I can’t stay away from them.”

Or this researcher’s observation: “When food is supplied, the individual is often caught between his desire to gulp it down ravenously, and to consume the prized possession slowly, covetously… some of our thirty-two grown men licked their plates to avoid waste.”

When food is abundant, humans will naturally eat what their bodies need and stop when they are satisfied. But when food is rationed, what should be a normal drive to feed oneself becomes a mental and physical struggle. In many cases, food becomes a full-fledged obsession.

Though the clinical study may have been undertaken for different purposes than understanding dieting, the psychological effects of food restriction it revealed are frightening.

If You Want to Gain Weight, Diet

A UCLA study found that while people on diets typically lose weight initially, by the end of four or five years, at least one-third to two-thirds of people regain more weight than they lost.

But this is more than just about weight. Diets fail as a long-term solution for health and wellness for a number of reasons.

Diets are stressful to the body: Dieting can send our bodies into “starvation mode,” a state in which metabolism slows in an attempt to conserve necessary energy. Also, the more we diet, the more we learn to trust an external food authority (i.e. a diet plan, nutritionist, or food scale) in lieu of our internal satiety cues.

Diets are stressful to the soul: A person can be successful in every area of her life, but if she continuously fails on a diet, she feels like a total failure. Dieting leads to anxiety around food, lack of self-trust, and a feeling of perceived transgression. (“I feel so guilty for eating two slices of pizza. I’m so bad.”) All these negative feelings lead to vulnerability around food and an increased likelihood of overeating. (“I already blew it! Let me eat the rest of this cake – my new diet starts tomorrow morning!”)

If you feel like an unchained beast around a pint of Ben and Jerry’s, it’s not you! It’s the diet.

Chances are, you’ve seen how diets can wreak havoc on people’s mental and physical health. You may agree that Intuitive Eating can bring you a peaceful relationship with food. The problem is, after years of being bombarded with dieting messages, the diet mentality has crept dangerously deep into our psyche.

Unconsciously counting nutritional information. (“I already used up my daily ration of fat, so I’ll take my salad without dressing.”)

Eating only foods your mind has labeled “safe”: low-fat or low-calorie foods. (“Fruit is ‘free’ on Weight Watchers, so I’ll have fruit instead of cake.”)

Paying “penance” for eating. (“I’m going to skip lunch because I had a donut for breakfast” or “I need an extra 15 minutes of exercise today because I put creamer into my coffee.”)

Preparing for an upcoming special event by restricting food intake. (“I’m not really dieting; I’m just cutting back a bit to lose a few pounds for the bar mitzvah.”)

Without letting go of the sneaky dieting voice in our minds, true Intuitive Eating will not be possible. Only when you dial down the critical dieting voice in your mind will you be able to truly hear the wise voice of your own body.

It is no surprise that 43% of Americans rang in 2015 with a resolution to lose weight by making healthier food choices, according to a Nielsen study. When we fret about our weight and food choices, more meaningful goals often take a back seat; diets take up so much of our mind’s capacity, and there just isn’t room left over for commitments to make other changes.

Ever hear food being referred to as “indulgent,” “sinful,” or “guilt-inducing”? Or a person who breaks her diet calling herself “bad”?

As we enter the month of Elul, think about how heavily diets and the desire to be “good” weigh on us. Think about how much time and emotional energy we waste trying to control our food intake.

Intuitive Eating allows us to say goodbye to life-sapping diets, and live a more present, joyous, and healthy life.

Have a question about Intuitive Eating? Email Rena Reiser at rena@mindovermunchies.com. Your question may even be featured in an upcoming column!

What is Intuitive Eating?

It’s the solution to the diet-binge cycle.

Developed by Evelyn Tribole and Elyse Resch, Intuitive Eating (IE) is an evidence-based approach that relies on your body’s basic intuition to feed itself. While diets depend on external messages to determine our food intake, IE places trust in the body’s natural nutritional wisdom.

We are all born with the instinct to read our body’s signals. Just as our body will tell us when we need sleep, and how much of it we need, our body is programmed to tell us how to eat.

IE helps us reverse the damage the dieting culture has wreaked on our body’s natural wisdom. It leads us back to the basics. It may have been many years since you’ve lived fully in your body, but rest assured, you can return.

The Ten Principles of Intuitive Eating

Adapted from Intuitive Eating by Evelyn Tribole and Elyse Resch

Rena’s Tool of the Month: Say sayonara to the scale

Joanie* had sworn off the scale while going through therapy for bulimia, and was well on her way to recovery. After a few months, however, she decided to weigh herself. She was so devastated by the five-pound weight gain that she began to purge again.

Laura* had been working on Intuitive Eating but found it hard to disengage from the scale. She went to her cardiologist and was told she had gained 20 pounds. Ready to throw in the towel on this “IE stuff,” Laura had a revelation – despite trying to become an Intuitive Eater, she still clung to a desire to lose weight and had never fully embraced the IE process. She tossed her scale, committed herself entirely to accepting and practicing the IE principles, and, after decades of struggling with disordered eating, had an astonishing turnaround in her relationship with food and her body. She revisited the cardiologist months later, now oblivious and indifferent to her weight, and when the cardiologist gleefully informed her that she had lost 32 pounds, she smiled and replied, “Oh, really? That’s nice.” She no longer needed the approval of the scale.

An essential tool of dieters, scales are a stand-in for the sanctimonious diet guru or punishing fitness instructor – scales keep us “in check,” for without an external measure of precisely how much we weigh at each given moment, who is to say we won’t gradually expand like a doughy braid of challah in a warm kitchen?

The concept of Intuitive Eating, however, maintains that we innately contain all the resources we need to support a healthy weight for our bodies, and that any external tools are not only unhelpful, but counterproductive to achieving true intuition in feeding ourselves.

While learning to eat intuitively, many people do gain weight initially. However, with time and effort, they reach a natural set point and stay there for the long-term. Weigh-ins only enforce an external fear, and set us back into diet mode. Trusting your body to maintain a healthy weight, while you do the work to treat it well, feed it well, and move it well, will give more internal satisfaction than a number on a scale.

Rena Reiser is a certified Intuitive Eating Counselor. She has changed the lives of countless women who have tried dieting and are “fed up.” She helps women come to peace with both food and life by discovering and satisfying our real hunger. She lives with her family in Karmiel. Find her at towardsahealthybalance.com. Elisheva Blumberg is a freelance writer living in Edison, NJ. She can be reached at elishevablumberg@gmail.com.

This article was previously published in Olam Yehudi, a publication of The Jewish Press. 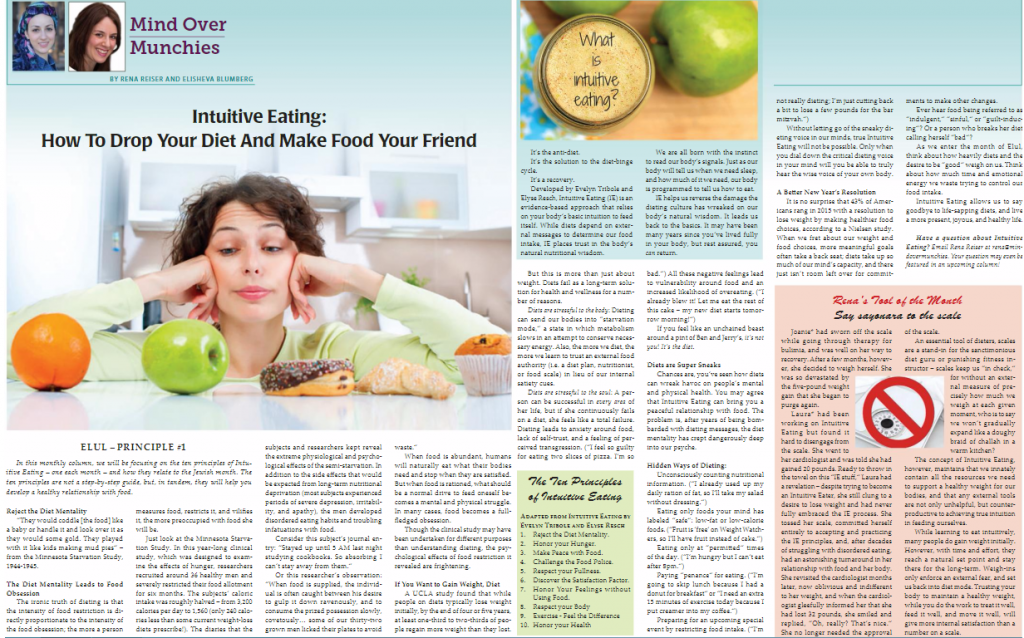 Hi there! How can I help?